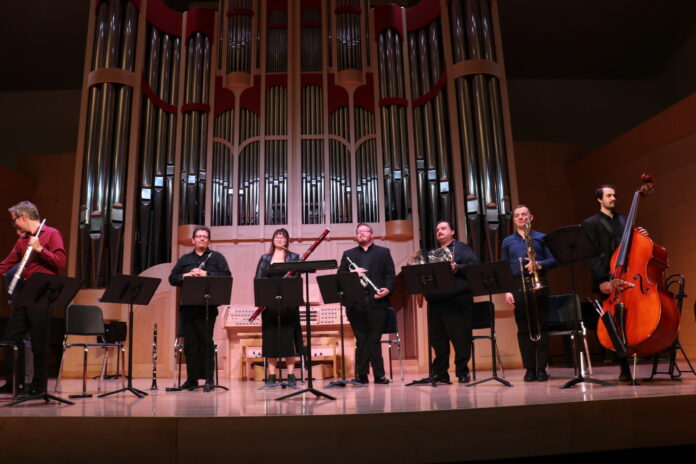 Nextet is a UNLV contemporary music series that was started in 2000 by Virko Baley, the former head of the composition division. The ensemble holds multiple concerts yearly to display new, distinctive music for students and locals for free.

Tim Warren, Nextet’s primary conductor and professor, believes performances like these are valuable to students.

“Nextet is an experience you can’t find (in) other places,” Warren said. “These are sounds that have never been heard before.”

Nextet is considered to be the “next ensemble of the 21st century” Jennifer Bellor, the current artistic director for Nextet said in a series of emails.

The program is a rare one in which not every piece will be liked by the audience, but they still want to give a chance to every piece performed, according to Dr. Bellor.

“Listeners are not expected to love every piece because everyone has their own personal tastes,” Dr. Bellor said. “I do find it really fun and interesting to engage with audience members after the concert and find out what their favorite pieces on the program were. Also, I love it when composers and performers talk on stage about the music.”

Nextet wants to give students the opportunity to play newly composed pieces that have never been performed, so students may see a new style of music created.

Dr. Bellor confirmed that there will be three more performances by the end of the spring semester next year.

The concert was performed on Sept. 19, and premiered around the world four times and once in the United States.

The concert ended up being viewed as a success by not only Dr. Bellor, but by Tim Warren as well, who only had good things to say about the programming and performance.

“I think that Jennifer’s programming is getting better and better every time, and it’s always been fantastic,” Warren said. “I think we premiered some really great music for a really great audience. So yeah I think it was a success.”

The pieces performed were all individual in sound and featured multiple combinations of instruments that played off each other.

Some instruments that were played were the alto flute, cello, clarinet, tenor saxophone, violin, piano and more.

One of the first pieces performed was “Waha’yoo Winds,” a world premier piece performed by a trombone and alto flute duo that periodically used rocks to accent certain parts of the song.

Then there was a world premiere of two pieces by a tenor saxophone and piano player.

The first piece was more resonant and rhythmic than the second, while the second piece was a high-tempo, energetic piece with a melodic section in the middle.

The piano interacted with the saxophone in a playful manner, hammering home the patterns and building the piece into a seven-minute dual piece.

The concert had two more songs with a string quartet that received the loudest applause from the audience after a performance that caught the attention of the entire auditorium.

This was followed up by one of the strangest pieces performed, which was conducted by Warren. The piece showcased a mezzo-soprano singer, a vibraphone, a tenor saxophone and a clarinet, it was a unique performance and one that had a deeper meaning.

The piece, named “r_carson,” is wildly composed, and has a fragile tempo. If one wrong note was played, the piece would be ruined. It is supposed to replicate the fragile balance of ecosystems and is composed after Rachel Carson and her “Essay on the Biological Sciences.”

The piece gave Warren the ability to look at the skill level it takes to pull off a high-quality performance.

Conducting is an art form of social skills that few can do at a high level and Warren gave some insight into what is the hardest thing about conducting.

“I think it’s definitely dealing with personalities, because as a conductor, it’s my job to encourage everyone to play,” said Warren. “And they’re coming from all walks of life and they’re all joining together in a very limited amount of time. So we have to communicate and build a positive environment without knowing each other and get the job done.”

Warren said that working with different personalities all the time can help student composers that conduct for Nextet.

“There’s a benefit of that student composer working with a conductor because I’m the person who interprets their music,” said Warren. “So that helps them in how they write and how their clarity comes out.”

This aligns with Nextet and its programming involving UNLV faculty and students.

When describing the benefits Nextet brings as a performance, Tim Warren talked about the ability to go support your peers.

“Getting out there to support other students,” Warren said. “We go see sporting events and things like that, and you see the bigger rock concerts and stuff here in Vegas, but these are classical concerts by your peers.”

Nextet only performs at Doc Rando Hall and does not plan to move any time soon. The next two performances by Nextet will be on Feb. 6, 2023, and March 22, 2023.