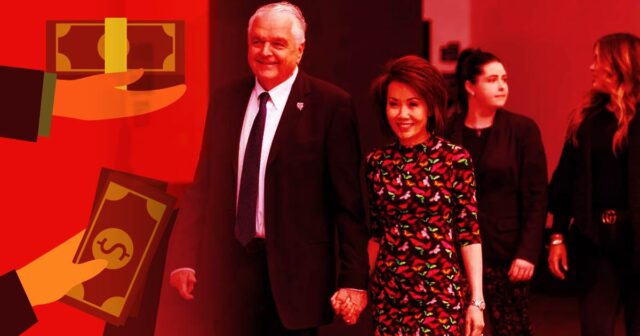 This morning Governor Steve Sisolak took to Twitter ranting, raving and demanding that his opponents leave his wife out of the campaign, and with good reason – if the corruption and billions of stolen tax dollars from his wife’s firm were exposed, it would mean not only the end of his political career but quite possibly a jail cell for him and his wife.

Northshore Steve is the most corrupt governor in America.

Back in August of 2021, a whistleblower came forward and exposed how Kathy “ONG” Sisolak was receiving no-bid government contracts and provided 360news with a copy of an agreement between the Southern Nevada Water District and Kathy Sisolak’s company Hoggs, Ong and Associates, Inc.

Ong is Kathy Sisolak’s maiden name. The no-bid contract paid Sisolak $250,000 for “financial consulting” services and was approved by Sisolak’s cronies and fellow democrats on the Clark County Commission back on July 15, 2021. The timing of the contract coincided with Gov. Sisolak signing a law pushed by the agency that banned lawns.

Did Kathy Ong funnel Money to her Husband, Steve Sisolak, in exchange for government contracts and favors?

One look at Kathy “Ong” Sisolak’s client list is a look into exactly how so many Sisolak-associated cronies profited from the COVID shutdowns while Nevada’s small business owners went bankrupt. For example, if you ever wondered how Resorts World and Raider’s Owner Mark Davis were allowed to continue their construction projects as Sisolak shut down the rest of the state over “COVID,” his wife’s client list may provide those answers.

Along with an impressive list of COVID profiteers, Mrs. Sisolak’s consulting firm provides “services” for Resorts World and The Raider’s Stadium — two companies that were allowed to continue construction during the shutdowns, as the rest of us were deemed “non-essential” and forced to stop working or close out businesses.

And just what are those services?

According to Kathy’s website, those services include helping corporations develop sports and entertainment facilities in Las Vegas, influencing local governments, and providing organizational and procedural requirements necessary to permit the project to move forward. Hmmm…. It sure sounds like Kathy may have been using her Husband’s office to procure clients, help those clients get around the law, and help them avoid her Husband’s mandates! I mean how else do you explain that almost all of her clients got special treatment and profited from the COVID shutdowns?

Kathy “Ong” Sisolak has overseen more than $35.4 billion in tax-exempt bonds used by state and local governments to finance capital projects. According to her own website she has also obtained more than $24 billion in tax-exempt financing through a variety of security instruments, including: revenue bonds, general obligation bonds, commercial paper and assessment districts, among others.

A list of her clients is a who’s who of of COVID profiteers and people who signed on to help Sisolak push vaccine and mask mandates and kill our small business community including:

Was Sisolak’s Fake Stop Asian Hate Campaign a way to use his Wife’s Race to Steal Millions?

As we exposed back in February, Steve Sisolak, his wife Kathy, and democrats on the Clark County Commission knowingly promoted fake Asian Hate crimes in an attempt to convince Nevada voters that white people were attacking Asians in Las Vegas. The only problem with the story is it never happened.

Even worse, the governor’s office actually accused an innocent man of committing a hate crime in Las Vegas’ Chinatown. Even after a video showing the man was actually the victim in the crime, Sisolak refused to apologize to the man or the public for making the whole thing up.

Since then, whenever someone provided proof of his wife’s criminal activities and fraud, Sisolak accused them of being racist. What a convenient way to shut people up! In fact, Sisolak has used the “cry racism” tactic to get out of dozens of political scandals.

During the COVID crisis, when it came out that Sisolak decided to use taxpayer money to buy COVID tests from a communist China associated company, Sisolak again pulled out the my wife is an Asian race card and accused anyone who even mentioned it of promoting Asian Hate — nevermind the fact that that same company was accused of selling defective COVID tests.

The tactic has been so effective that  Sisolak appears to have even gotten out of a DUI charge after his wife removed evidence from his vehicle in full view of the police and their body cameras. Yet, the local media has never once asked Sisolak what his wife removed from his car after his suspected DUI accident.

On top of appearing drunk, Why was the Governor Sisolak’s handler & wife allowed to remove evidence from vehicle, claiming they had to remove “garbage” — would that be your first worry after an accident, unless that garbage was open liquor or drugs!https://t.co/bfFOJNRWFp pic.twitter.com/YguzHqd1zo

Nevada Politics at its finest!

Of course, this is nothing new to Nevada. Nevada Democrats are just carrying on the Harry Reid legacy, and our local media is covering for them every chance they get.

In fact, even after a Clark County democrat official killed a Las Vegas reporter, they still covered for our governor, claiming he never knew the killer. But as usual, they were lying. As we reported yesterday, Sisolak not only knew the psychotic Democrat madman, he appointed him to a board that siphons over 93 million homeowner tax dollars a year to so-called homeless programs. And yet again, not a single call for an audit of where that money is actually going, even after the killer’s corruption and ties to Sisolak were exposed.

But then again, asking for an audit would likely put Kathy and her clients in an uncomfortable situation. I mean, at the very least they would have to explain how a governor’s wife has clients that include almost every single government office in the state.