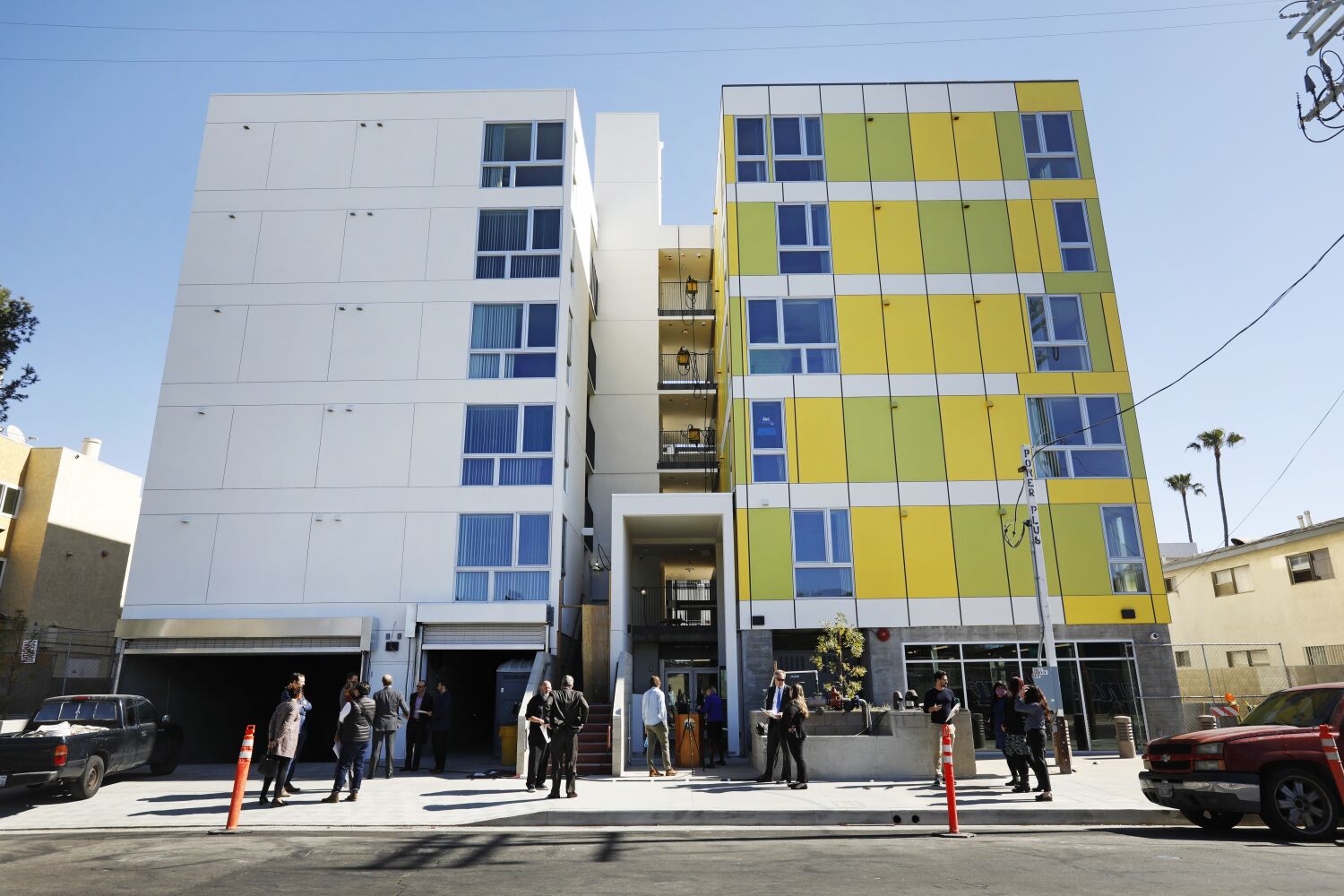 Los Angeles has far too little housing, especially of the affordable variety. A 2021 study by the California Housing Partnership found that nearly 800,000 low-income households in the city need low-cost housing, but the supply of affordable units is almost 500,000 short.

The city’s current housing plan calls for about 200,000 new affordable units by the end of the decade; state housing officials say the city must move faster to zone neighborhoods for more homes. Either way, the demand will greatly outstrip the supply.

Still, new affordable units are opening every year — more than 8,200 were added to the city’s inventory from April 2021 through March 2022, according to the city’s housing report.

“In the last five years, the growth of units being built has just skyrocketed,” said Emilio Salas, executive director of the Los Angeles County Development Authority. “I’m at a grand opening or a groundbreaking at least once a week.”

In addition to buildings dedicated to low-income housing, developers are often adding reduced-rent units to their market-rate and luxury housing complexes. In return, they’re getting permission to squeeze more units onto the property, create fewer parking spaces or ignore certain other rules. The incentives are having an effect: The vast majority of market-rate projects winning approval from the city include affordable units.

The most visible example of a mixture of market-rate and affordable units may be the Grand LA, a 510-foot tower in downtown Los Angeles designed by Frank Gehry. Per a development agreement with the city, 89 of the tower’s 436 apartments will be affordable units, 66 of which will be reserved for people with limited mobility, sight or hearing. (The application period for affordable units at the Grand is closed.)

But how can renters find out about those units, and how do they get filled?

What is ‘affordable’ housing, and who qualifies for it?

According to the federal Department of Housing and Urban Development, housing is “affordable” if rent and utilities cost no more than 30% of your total income each month. Households spending more than that amount are considered rent burdened.

About half the households in L.A. County were rent burdened before the pandemic, Census Bureau data show. And in South and Central Los Angeles, a 2020 survey found that 3 out of 4 households were rent burdened, with many of them spending more than half of their income on housing.

Affordable units in L.A. County thus have their rents capped at 30% of the monthly income of the targeted group. To qualify for a unit, you’ll need to earn less than 50% to 60% of the area median income for your household size — the larger the household, the higher the income limit.

Those income limits are used to calculate eligibility for Section 8 housing vouchers as well. If you’re awarded a Section 8 voucher, you can use it to help pay for “market rate” housing (that is, homes that aren’t classified as affordable). You’ll be required to pay 30% of your monthly income in rent, however — and up to 40% if the unit rents for more than the standard set by HUD.

How do you get an affordable unit?

There are three main steps to the process of renting out new affordable units.

First, the property manager has to let the public know that units will be available. It’s not as simple as taking out an ad in the newspaper or posting a notice on Craigslist, however; under the rules set by HUD and local authorities, developers have to find ways to alert the eligible tenants across the city who are least likely to learn about apartment openings.

For the Grand LA, that meant listing the property in the Los Angeles Housing Department’s online Affordable and Accessible Housing Registry, which alerted its mailing list and collected names of interested people for the property manager to contact. The Grand also distributed flyers through nonprofit organizations identified by the city, including family and youth service centers, senior centers and organizations serving disabled or homeless Angelenos. On top of that, it did some marketing on its own.

This sort of outreach is standard operating procedure for developments with affordable units, even though the demand is already overwhelming. Durinda Abraham, director of property management for the Community Corporation of Santa Monica, said her company recently received over 6,000 applications for a 49-unit building in Los Angeles. “That speaks to the need,” Abraham said.

In the second step, the property manager collects applications, which may be submitted in person, through its website or by mail. Once the application period ends (typically a month after it opened), the manager conducts a lottery to determine the order in which the applications will be reviewed. The folks who submitted their applications earliest have no advantage in the lottery, nor do people who have waited the longest for a unit, officials say.

Being a top finisher in the lottery doesn’t guarantee you’ll get a unit, however. It just means you’ll get the first chance to submit your paperwork to show that you meet the income limits.

Then comes the third step: determining which applicants can move in. Each applicant’s financial information — income, assets, dependents, benefits — will go through a verification process. Those who pass will often have to pass a background check and meet other criteria to be accepted as renters.

The lenders and agencies that supported the project have a say in the criteria used to judge applicants. For example, Donna Lambe of the John Stewart Company, which is managing the Vermont Corridor affordable housing development for seniors in Koreatown, said some lenders will require applicants to undergo credit checks that could be used to bar households with a lot of bad debt, while projects devoted to homeless residents may not consider applicants’ financial histories.

There’s one other potentially significant hurdle for applicants: Different shares of the units will be reserved for households of different sizes, income levels and accessibility issues. Some units may also be set aside for tenants who were homeless and now need permanent supportive housing. If you passed the income test but don’t fit the other criteria for any of the remaining units, you’re out of luck at that building.

How can you find out about available units?

A good place to start in the city of Los Angeles is the Housing Department’s relatively new Affordable and Accessible Housing Registry, where you can sign up to be notified when new projects are listed, applications are accepted or filled waiting lists reopen for new renters-in-waiting.

Ann Sewill, the department’s general manager, said the site lists roughly 45,000 units covered by affordable housing covenants with the city and adds new projects as they come in. Older affordable units, meanwhile, are being added as their owners supply the necessary information, she said.

Projects such as the Grand LA that mix market-rate and affordable units aren’t often found on the registry at this stage, although the city aims to include those units as well. The main way to learn about units in mixed developments is to look for advertising online, in media and through nonprofits in your community.

The county also has an online Housing Resource Center that provides searchable listings of a variety of homes, including affordable and accessible ones.

If the city or county supports a project with funding or incentives such as a density bonus, it will require the property manager to post the units to the city’s registry or the county’s Housing Resource Center. Salas said the county also invites any property owner who accepts Section 8 vouchers to list units on the Housing Research Center site, while also helping voucher holders find landlords looking for tenants. The challenge there, he said, is for owners to remove units from the site after they’ve been filled and keep their listings up to date.

(The sites and the marketing plans are helpful, but most people find affordable units in old-fashioned ways: through family, friends or their own observations, according to a 2018 study by Carolina K. Reid at UC Berkeley’s Terner Center. In a survey of more than 250 residents of buildings financed by federal tax credits, Reid wrote, about a third learned about their units from a friend or family member who lived in one of that developer’s properties, and an additional 28% learned about it by walking by during construction.)

Here’s another tip for finding affordable units: Get onto as many buildings’ waiting lists as you can. After a building fills, units will open up sooner or later as tenants move out — maybe they no longer meet the income limits, or maybe their family size changes. At that point, property managers often reach out to people on their waiting lists rather than advertising the openings.

One other online source is HUD, which lists available affordable units by county and city. The list isn’t comprehensive, but it’s a font of information on affordable units in older buildings.

How do more affordable units get built?

Not by the federal government, at least not directly. HUD stopped providing grants to expand the supply of public housing in 1994. Instead, its emphasis has shifted to vouchers, and it has largely limited direct construction funding to projects that replace older units with new ones. In both cases, officials say, the government hasn’t come close to meeting the demand for aid.

(Local governments can use up to 30% of their voucher funding to support new or renovated units for low-income tenants, assigning the vouchers to specific apartments instead of specific people. That approach has been a “godsend” for lower-income renters who’d otherwise be unable to find housing, Salas said, but L.A. County is quickly approaching its 30% limit.)

Still, the feds do provide tax credits to state and local housing agencies to help finance 100% affordable housing complexes by private developers. Projects that receive tax credits must reserve at least 20% of their units for people earning less than 30% of the area median, with the rest divided among renters earning less than 50% and less than 80% of the area median. That’s an important source of new units, as is financial help from local governments.

The city and county of Los Angeles also use state and local incentives to promote the construction of affordable units within market-rate apartment complexes. For example, developers of market-rate apartment complexes may be allowed to build more units if they agree to make a portion of their units affordable (the “density bonus”). And under 2016’s Measure JJJ, the city can offer more density, relaxed parking requirements and other incentives to developers of projects near major transit hubs that make 8% to 25% of their units affordable.

About The Times Utility Journalism Team

This article is from The Times’ Utility Journalism Team. Our mission is to be essential to the lives of Southern Californians by publishing information that solves problems, answers questions and helps with decision making. We serve audiences in and around Los Angeles — including current Times subscribers and diverse communities that haven’t historically had their needs met by our coverage.

How can we be useful to you and your community? Email utility (at) latimes.com or one of our journalists: Matt Ballinger, Jon Healey, Ada Tseng, Jessica Roy and Karen Garcia.